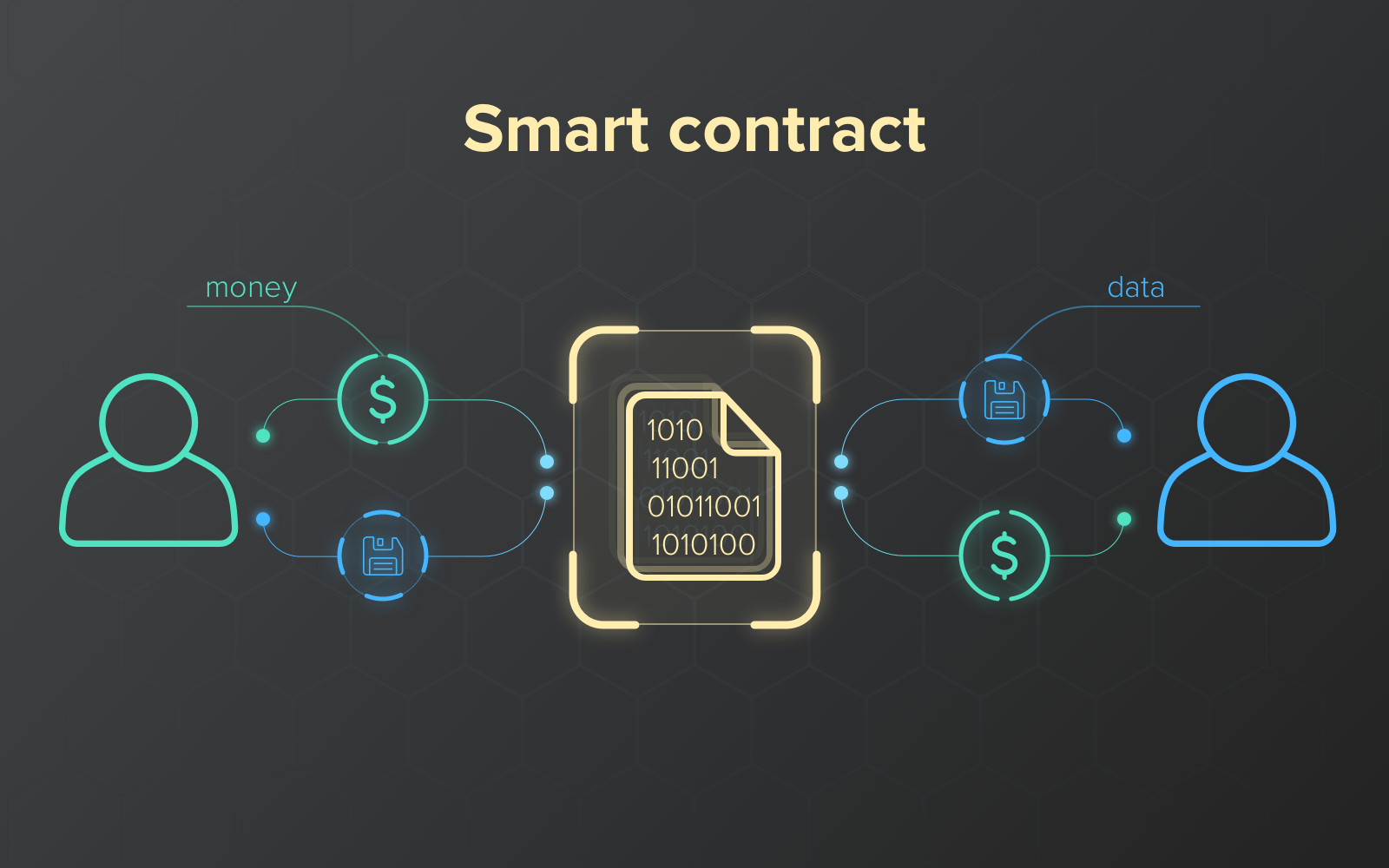 Blockchain benefits business processes for a while now.

Developers created tons of solutions with the help of distributed technologies. One of the most admired is smart contracts. It brings the conclusion of arrangements on a brand new level.

In this post, you’ll learn how to increase the effectiveness of many business processes with the help of smart contracts. Let’s get moving.

The concept of a smart contract

A smart contract is basically a computer program that automatically executes, controls, and documents specific events automatically according to the terms of the contract or an agreement.

These contracts are kept in the blockchain and distributed between several computers.

The difference between conventional and smart contracts For now, if you need to make a deal, you’ll have hard times while hiring a lawyer and managing paperwork. While filling conventional contracts, some rules can be violated, leading to spending more time redoing the same thing once again or even applying to the court if the issue was detected too late.

Now, let’s get to real-life examples of a smart contract. Imagine that you need to purchase a previously used product from a random seller on some platform. The product has an attractive price, but the seller wants to get the money first. The platform doesn’t provide any guarantees about the safety of the deal, so prepaying the purchase is very risky. However, if the platform uses smart contracts, the deal can be held smoothly without any risks.

A distributed software keeps track of all changes made with the contract from both sides. Thus, it will know if the payment was transferred, when the goods get to the customer, and more.

If some of the clauses in the contract are violated, the deal won’t happen, and both parties will get their money and goods back. Besides, if the contract has special clauses, the violator will get fined.

As was already mentioned, smart contracts are a blockchain-based technology. The data is transmitted over the distributed network, so users can make transactions and exchange the data directly and securely. That is why blockchain and smart contracts go hand in hand.

Smart contracts ensure safety and confidence for both parties because every process in the contract fully depends on the software code. However, it is obvious that the code should be well-written, so you need a professional developer who has expertise with blockchain technologies.

How to create a smart contract?

Basically, the contract includes four main components. Let’s single out each of them. Smart contracts can be used in various business fields and financial operations. Let’s discover the best use cases for smart contracts.

Smart contracts help with commercial processes throughout the deal. If delivered goods or services were of poor quality, the supplier will be fined or forced to replace the goods due to the contract terms.

Smart contracts allow various organizations to keep track of financial data. The software saves all the data in one place and makes exchanging financial information as easy as it never was. Thus, companies will make their process more cost-effective.

Car insurance is another field that can be improved with smart contracts. Users can store insurance policies and information about driving history inside the software. After an accident, insurance officers can send requests to get information about the accident to speed up the compensation process.

Doctors and patients can benefit from smart contracts since they help to keep track of a patient’s health condition.

With instant access to a health record, doctors can increase their productivity and even save someone’s life in emergencies. Building an EHR system with the implementation of smart contracts is a successful strategy for healthcare establishments.

With smart contracts, it is possible to control the overall supply chain at any moment you need.

With overall connectivity, the software keeps track of the transfer of goods. Users can monitor their purchases from the warehouse right to the post office.

As we already know how smart contracts can be used in business, we should discuss their advantages over conventional technologies.

Distributed technologies grant encryption and safe storage for sensitive data. That is why, when using smart contracts, you can be sure that your information won’t fall into the hands of some fraudsters.

Compared to conventional contracts, distributed technologies automate most processes and don’t require any intermediaries during the agreement. Such autonomy for users allows making deals faster and cheaper.

Smart contracts are computer programs, so the number of mistakes committed will be significantly lower compared to manual data entry. From a long-term perspective, this fact may save you a lot of money and nerves.

All parties involved in the contract can track the progress and the deal. If deal terms are violated, all parties will be warned, and the contract won’t be concluded.

Even though it seems that smart contracts are a great solution for business, they also have their pitfalls. Everything has its price to pay, and now we’ll discover the main drawbacks of smart contracts.

Even though smart contracts are software, it is also created by people. And sometimes, developers can make a mistake that can’t be changed in the future.

Blockchain doesn’t allow you to change the initial code. That is why a single mistake can cost a lot of money to you and the other parties involved.

Smart contracts are relatively new to the world. That is the reason why almost every country doesn’t have regulation policies.

Even though some US states conduct research and EU-based organizations arrange forums concerning this topic, there are still no particular improvements.

As it was said before, blockchain technology is a double-edged sword. It is great that contracts can’t be changed after they are placed in the blockchain.

But on the other hand, if the terms of the deal will change, you will be forced to create a new one and cancel the previous one.

To sum up, you can see that smart contracts are a powerful technology that can turn the business world upside down. Automation of processes, reduction of possible mistakes, and high accuracy play a vital role in a lot of business processes.

However, to create outstanding software for smart contracts, you need to find a reliable software development partner that won’t make any mistakes during the development process.

Vitaly Kuprenko is a writer for Cleveroad. It’s a web and mobile app development company with headquarters in Ukraine. He enjoys writing about technology and digital marketing.

How to Get Employees Involved With Company Values